We woke up to a true Maritime day with very gusty winds and rain.

Thanks to Jen and Jans, our Airbnb hosts in Englishtown for a wonderful place to call home for the last 3 nights.

Today, we were on a tight schedule, because we had a date for a home cooked turkey dinner with Rita and Steven in Oromocto.

But first, the Patio Girlz headed to St Peter’s to visit the MacAskill House Museum, the birthplace of Wallace MacAskill, a renowned Nova Scotian photographer in the early to mid 20th century. Never heard of him? Check out the Canadian dime for the Bluenose sailing vessel. It is based on a photograph by MacAskill. Kathy has a small collection of his black and white and hand-tinted photographs and was happy to see many others and learn more about this man. Shout out to our tour guide #Johnmichaelwall #MacAskill #explorecb 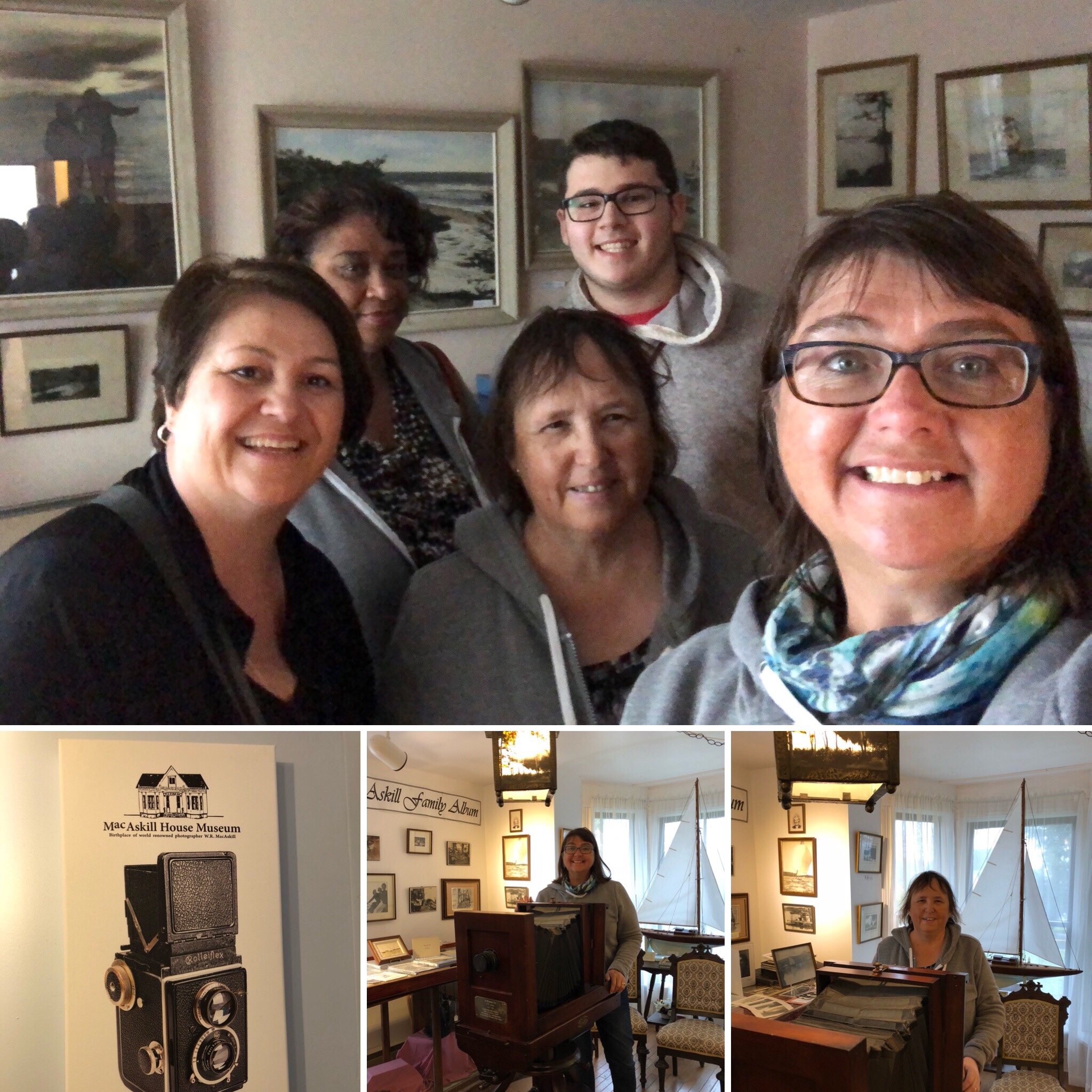 On our way back to the causeway, we passed River Bourgeois, which was the summer home to Farley Mowat for many years. Unfortunately time did not allow us to check out this village and Farley’s influence there.

So, we waved goodbye to Cape Breton and headed north to Amherst to visit #DeanneFitzpatrick rug hooking shop. What a wonderful studio with lots of finished rugs on the walls and some great kits to be purchased. Gwen gave lots of encouragement to the Girlz and now each of them have a starter kit! The Patio Girlz may soon become the Patio Hookers!

Our time was up and Pat started to corral the rest of us back to the car. (I think she really wanted turkey!).

A huge shout out to Tracey’s aunt Rita for preparing a delicious dinner with all the fixings. Turkey, gravy, stuffing,mashed potatoes, carrots and turnip, squash, cranberry jelly, and rolls!! As Kathy scooped mashed potatoes on her plate, she was heard to say, “I’m glad we aren’t having seafood!”

We finished off dinner with an ice cream birthday cake for Tracey! Her birthday is still a few weeks away so it certainly was a surprise for her.

Our final sightseeing stop for the day was at Hartland to see the longest covered bridge in the world. On our way to the east coast we promised Pat we would stop on the way back and she held us to it, even though it was dark! But when the time came, Pat stayed in the car so there are no pictures of her at the bridge…does that mean she really wasn’t there? Kathy was unable to get out because of the bags of Oromocto buns and scones that penned her in the backseat. After Tracey and Gwen left the car to snap a couple of selfies, they realized they had left the keys in the car with the same two Girlz who drove away and left them on the side of the road in Baddeck. So they hurried back to the car.

Another eventful day on the road for the Patio Girlz. Tomorrow we head home !